A special guest post from my Father in honor of #VintageSciFiMonth he chose to read and review Tolkien’s Roverandom which was published in 1998 but written in 1925 so we feel it qualifies. 🙂 My parents were my primary inspiration to read so it is with great joy that I share this review from my Dad with y’all: 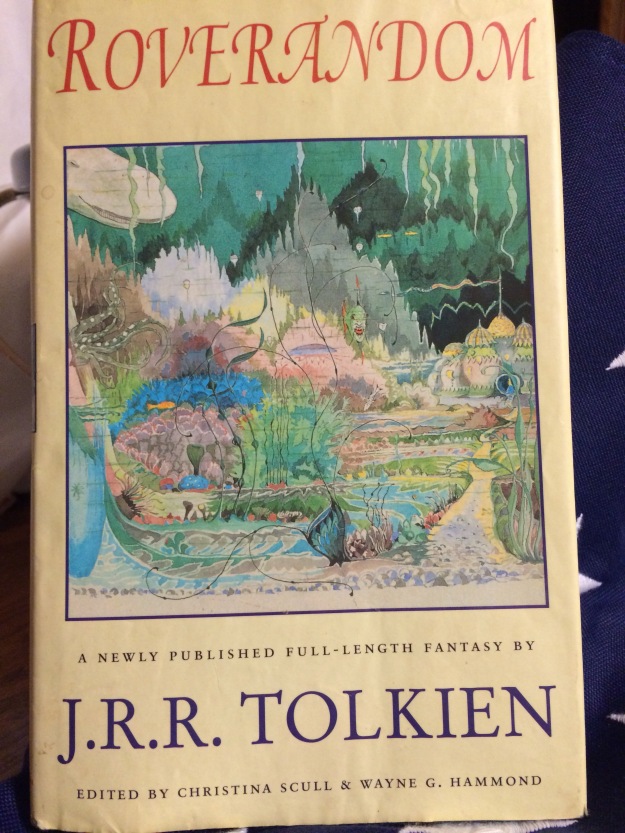 Roverandom is a novella penned by J.R.R. Tolkien during the summer of 1925. It was published posthumously in 1998. This fantasy sprang to life in an effort to bring comfort to his son, Michael, upon the loss of his favorite toy, a miniature black and white dog made of lead, while on holiday in Filey on the Yorkshire coast. It’s an interesting short read in which one can see inklings of his greatest works to come.

Rover, a very small and very young dog playing in his garden with a yellow ball and an old man comes by and picks up the ball. Now as it is said in the book, “Not every old man with ragged trousers is a bad old man…a few, a very few are wizards prowling around on a holiday looking for something to do.” This wizard came wandering up the garden path a ragged old coat with an old pipe in his mouth and an old green hat on his head…with a blue feather stuck in the back of it.” Rover misinterpreting the wizard’s intentions of picking up his ball ultimately bites and tears the wizards trousers. The old man became very angry and simply said, “Idiot, go be a toy!” From this point, Rover begins a journey that will lead him from his beloved garden to an adventure that takes his to the moon and back to under the sea and back home again.

Rover meets up with a ‘sand-wizard’ who takes pity on him and sends him on a journey to the moon to meet the Man-in-the-Moon, a wise and powerful wizard. While there he meets the wizard’s moon-dog, also named Rover. Since two Rovers are confusing, the man-in-the-moon renames him Roverandom. After dealing with dragons and black spiders (among other adventures) he heads back to Earth. There he is sent to the bottom of the sea to find Artaxerxes, the wizard who placed the spell on him in an effort to apologize and be released from the spell.

Artaxerxes hasn’t the time for a small little dog and doesn’t care to be bothered. Roverandom meets up with the Mer-King’s mer-dog, named Rover. Both become friends and swim to many more adventures. Artaxerxes, now the Pacific and Atlantic Magician, meets with an ancient Sea-serpent who is waking and causing trouble. Roverandom manages to create an event with the Sea-serpent that has all of the mer-folk so upset with their PAM that he must leave and go back to land. Artaxerexs ultimately accepts Rover’s apology and the spell is reversed. In the end “Roverandom grew to be very wise…and had all sorts of other adventures…”

In this novella, one can see the beauty of Tolkien’s mind at work in weaving a tale of fantasy to comfort his son in the loss of his favorite toy and more importantly, see the beginnings of greater tales of wizards, dragons and heroes waiting to come to life.

January was #VintageSciFiMonth for several book reviewers. It is a wonderful idea created by LittleRedReviewer
https://littleredreviewer.wordpress.com
and summed up it is simply this: In January read SciFi books published before your birth year. It is a lot of fun and I’ve been joining in now for a couple of years. I actively look forward to January reading now and purchase vintage SciFi books throughout the year with this month in mind. 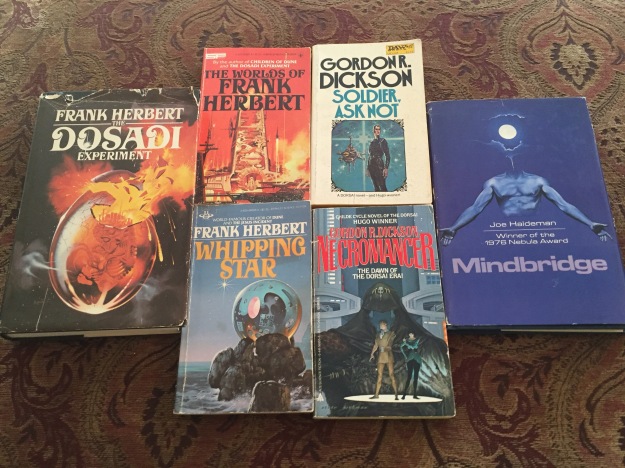 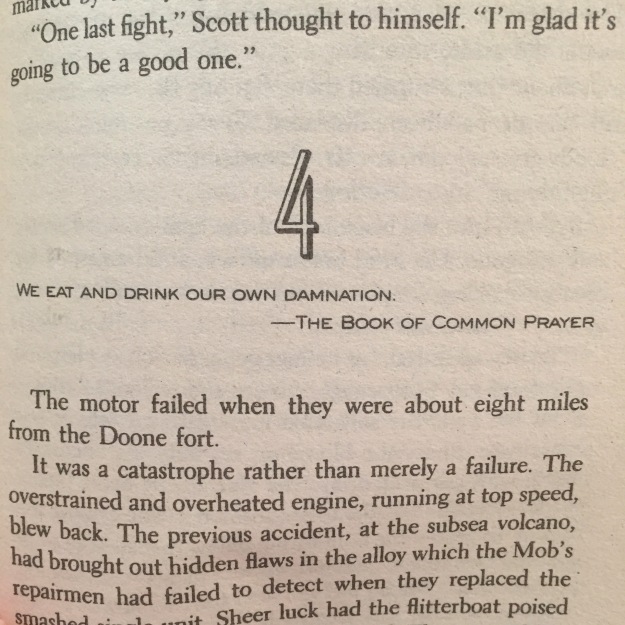 Henry Kuttner is an inspiration for David Drake. Drake is one of the finest Military SciFi authors, so when he showcases one of his sources of inspiration it is worth taking note! Kuttner’s novella Clash By Night was published in 1943 with all the fears of an atomic war and ignorance of Venus that would have been prevalent at this time. However in this brief story Kuttner brings his characters to life and lets them dance across the pages. It was fun to read and also served as a good reminder to not destroy the earth. 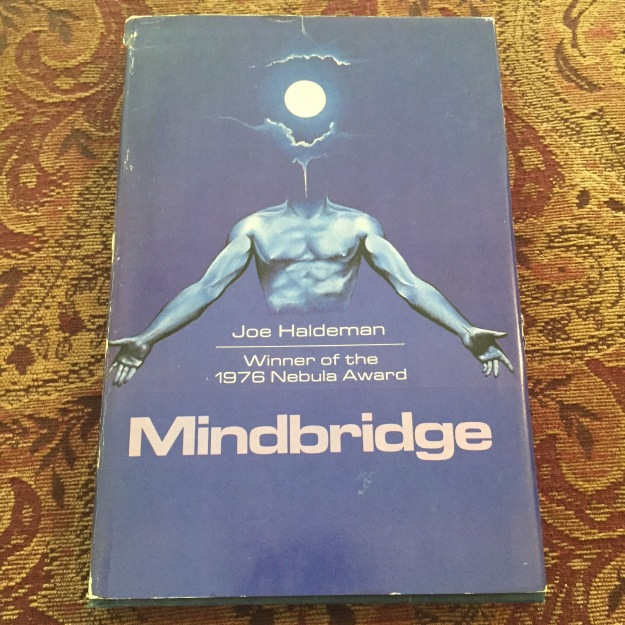 Joe Haldeman is famous for his masterpiece The Forever War, and rightfully so. It is incredible. However his other works are also incredibly well done and worth reading. As is his book Mindbridge which was published in 1976. I couldn’t set the book down. Talk about a pageturner! You are drawn in within the opening sequence and are desperate to know where the story goes. Telepathy, First Contact, Morality, Love, Space Travel: all are topics this master covers and does so in an engaging fashion. Mindbridge is one book you probably haven’t heard of before that you should pick up and read. 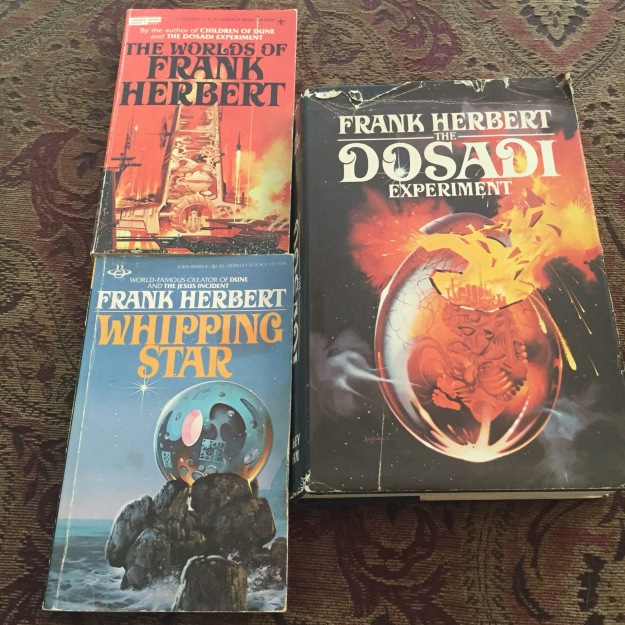 When you think of Frank Herbert you think of Dune. When I think of his Dune Saga I realize again and again that it truly is my favorite work of fiction. Yet for so long it is all I knew of Frank Herbert’s work! I use Vintage SciFi Month as a chance to explore Herbert’s other works and The ConSentiency Universe is where I explored this month. I Started with the short story The Tactful Saboteur published in 1964 in which Herbert created an interesting universe of politics, legalities, and sabotage. He continued the series in 1970 with the novel Whipping Star. As you read the novel the title actually makes a lot of sense! Frank Herbert has a way of filling pages with action but hiding the action within the dialogue. He continued the series in 1977 with The Dosadi Experiment which is the novel I am reading (and loving) right now. There is one other short story set within this universe that I hope to read soon. This universe is vastly different from Dune but contains the creativity, philosophy, and study on humanity you loved in Dune. 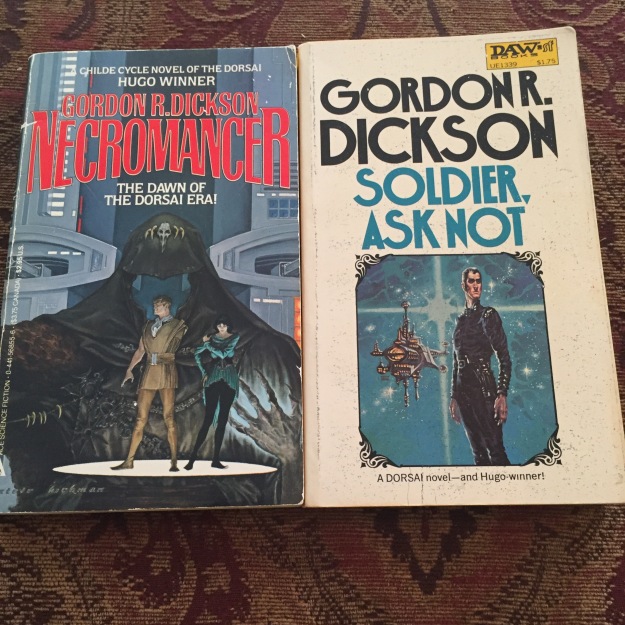 Last year for Vintage SciFi Month I read the first book of Gordon R Dickson’s Childe Cycle: Dorsai! It was incredible. So incredible that I had to continue the series this year and so I read the next two books in the Cycle. Necromancer was published in 1962 but was set prior to the events of Dorsai! In it you see the origins of the Splinter Cultures which are the evolutionary children of humanity spread out amongst the stars. Necromancer sets the stage and the philosophy that caries the series forward. Soldier, Ask Not was published in 1967 and takes place at the same time as Dorsai! and within its pages we see more of Dickson’s grand view of humanity’s connectivity and the shaping of our next evolutionary step. You also learn the value of faith and love in the midst of reason. I can’t wait to read further within this series.

Altogether this Vintage SciFi Month has been a lot of fun and I’ve greatly enjoyed seeing and hearing about all the books my friends are reading and discovering during this time! Thank you to all who participated and cheers to great SciFi reads! I’m already looking forward to next year’s Vintage books!