Today’s Circle Of Bookish Friends challenge on Bookstagram is about the father figures in our lives and I am fortunate to have an incredible dad who invested his life and love into his family and will always be my inspiration and standard. I grew up in a reading family and my parents to this day are discovering new to them authors! My dad just read his first Andre Norton book and gave me the following review to share on The Sioux Spaceman. Enjoy this word from my father: 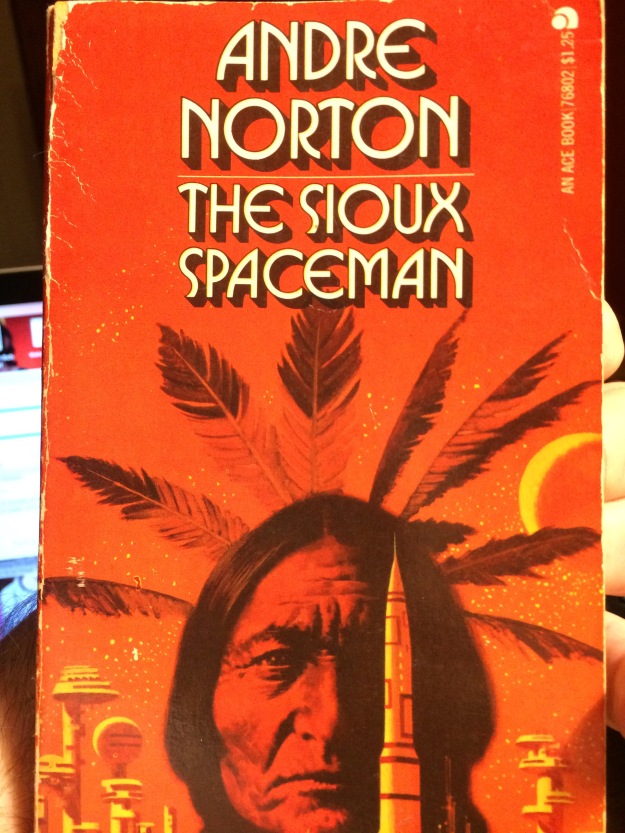 First off, “The Sioux Spaceman” by Andre Norton was written in 1960 when I was 12. Skip forward to a great many years and this paperback edition caught my attention on the $0.50 sale rack at The Book Nook, a local treasure house of primarily used books that I like to frequent. Knowing nothing about the author, I looked her up (yes, her) on the Internet only to find out that she was a science fiction and fantasy (along with a couple of other genres), but that she the first woman inducted into the Science Fiction and Fantasy Hall of Fame, among other awards (twice nominated for Hugo awards). She wrote for over 70 years having over 300 titles published. I also found it interesting that like another woman author S. E. Hinton, she was advised to publish under a male’s name to increase her marketability to young boys, the main consumer of fantasy.

Since “The Sioux Spaceman” was primarily written for the young adult market in 1960 it would not have caught my eye back then since I was more interested in comics at 12 years of age. Today, 57 years later it caught my eye on that 50-cent sale rack. After all, what’s 50-cents really worth now-days? I found that it was well written, with excellent main character development and well worth my investment of time for an enjoyable read of older works of science fiction. The protagonist, Kade Whitehawk, a Trader for the Space Service, finds himself being reassigned to a Team on the planet Klor in disgrace. Once on Klor, he is slowly being drawn into a battle to help the indigenous population free themselves from the alien Styors who have enslaved mercilessly enslaved them. Again, Whitehawk goes against Space Service policy and sets a plan in motion to help the Ikkinni get free from the hated Styor’s star empire. The plot is, well, just a bit juvenile (after all it was written with that reader in mind), but is sufficient to keep the reader engaged. Since Whitehawk is of Sioux warrior descent he succeeds in getting horses delivered to the planet and helps to get the natives to trust in using them to begin the their liberation. After the battle begins, he is abandoned on Klor in the not so gentle grasp of those he was trying to help. The Space Service sent a rescue ship to his summons and what is revealed to him after the ship lands astounds him. With the Space Service there is the Policy (think Prime Directive of Star Trek) and the Plan. He is one of the few whom the Space Service consider a black sheep who serve in a rebellious state they call the warrior breed. He is then given the opportunity to remain and continue assisting in the Ikkinni’s freedom struggles or go. After all, he is told, “a push here, a push there topples a star empire.”

We’ve all been missing the weekly Dark Horse Presents reviews so here we are! Back again reviewing the greatest comic book anthology ever. Time to look at the awesomely huge 28th volume! This one was released to celebrate four years of Dark Horse Comics existing! No mean feat in the 80’s when Marvel and DC ruled comicdom with iron fists!

This comic book contained four AWESOME stories….. and two comedic monster throwaways in my opinion. Maybe cheesy monster comic short stories are your thing! If so you’d probably enjoy Roachmill or Mr Monster. It isn’t my thing so less said about those the better.

Homicide by John Arcudi and Doug Mahnke really causes you to be afraid with this intense episode. The use of Pat Brosseau’s lettering for the shotgun blasts and cocking really hits hard. Well done!

Concrete by Paul Chadwick AGAIN proves to be way ahead of its time! This conversation on what we are doing to our planet and the realization that we’re connected to it needs to happen today! Thankful he was bringing it up in 1987, saddened that we still neglect this topic in 2017.

ZONE! I’ve been waiting for Michael Kraiger’s intelligently done comic book to make an appearance! Love his use of grey tones in his art and how he uses the lettering to draw you into his work. We’ll see more of this as DHP continues!

You might be bad ass. But you’ll never be Black Cross clutching barbwire after killing a small army bad ass. Chris Warner again delivers on this emotional action as Black Cross wages his solo war against an immoral enemy.

Almost reached a few of my favorite stories! Eager to read and review on!