Feature Friday consists of short feature pieces on authors who deserve attention. These Feature Fridays will hopefully draw your eyes to some amazing books you might have otherwise missed!

My first introduction to Brian Ruckley was to read his amazing book The Free which tells the tale of the greatest band of mercenaries ever taking one final contract that could spell their doom while possibly saving the world. It’s also the tale of a young lad snatched up from his family home and thrust into his lord’s army who ends up surviving his first taste of war and falling in with The Free. It’s a beautifully tragic tale that is full of magic and warfare. Truly an incredible book! 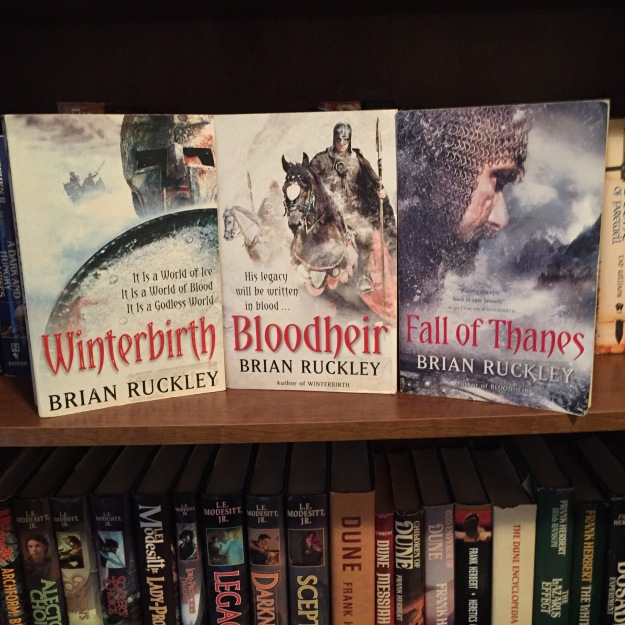 Brian Ruckley also wrote The Godless World Trilogy which is amazing. I’m on the final book of the trilogy now. It is a brutal world that was abandoned by the gods who created it. The beings left on the planet are warring amongst themselves and are unleashing furious magic upon the world. I honestly don’t know how this trilogy will close and have no idea if the primary characters will live to that end. That makes me love this trilogy all the more.

Brian Ruckley’s work is incredibly good! Very well written characters, excellent world building, tragic realities, brutal warfare, and captivating stories! I hope you give his work a read! Download a sample of The Free here and be ready to enjoy an incredibly moving story.

Listen to and amplify the voices of the oppressed.
The Heresy marches onwards! This was a good story but featured my least favorite Primarch and Legion. The Lion is so arrogant and focused on actions that he doesn’t consider consequences worthy of his notice and destroys far more than he establishes. The interesting half of this book is the half that focuses on what is happening to the Dark Angels that are away from his control. Book thirty-eight of the #HorusHeresy is done. Starting book thirty-nine and hoping for a story without the Lion! Do you find it difficult to review books in a series? I find it difficult because I worry about spoiling things for other who may want to read the series. Mentioning that Lion El’Johnson is in book 38 means you know he (sadly) didn’t perish in any of the earlier 37 books. I know that’s a mild spoiler, but I know I personally like entering a book with as little knowledge of it as possible.
Anyone else getting that great quarantine hair?😂 Descender is one of the best SciFi comic books! Amazingly beautiful artwork and an engaging story combine to make it into a very special story. One I need to complete reading as I’ve only read the first few collected volumes. The story of a little robot separated from the boy he was growing up with and that robot’s search for the boy years later while galactic war looms. It was fun doing a light recreation of the cover. I might have to try more of these types of photos!
Every so often you come across a book that overturns and dances upon your currently reading pile and TBRs. This is one such book. Beautiful and heartbreaking. Amazingly well done. Even knowing how the story must go, you find your heart hoping against hope, and cherishing those precious moments stolen by the heroes from the fates. This is an incredible book.