The Most Influential Books and the Runner Ups

I was asked to share on which books were the most influential books in my life. This is an incredibly difficult task for me because it’s incredibly hard to isolate a few out of the many. It was made a little more difficult as I was trying to share a picture of them and realized that I keep giving some of the books I would have selected (The Great Divorce by CS Lewis or My War Gone By I Miss It So by Anthony Loyd or The Giving Tree by Shel Silverstein) away as gifts to other readers. So I limited myself to these five books that I currently own:

The Silmarillion by JRR Tolkien was the book that inspired me to read. Seriously. I saw it as a child and knew I had to read it. So I did and it launched a lifelong love of books. Dune by Frank Herbert transformed my worldview more than any other work of fiction. Meditations by Marcus Aurelius was written by a Roman Emperor 2,000 years ago and still speaks strongly to how I desire to live today. Shadow Of A Dark Queen by Raymond E Feist inspired me to write my own stories when I was a teenager and still does today. The Killing Rage by Eamon Collins laid bare the Irish Republican Army from the inside out and helped me to see what could inspire a man to kill and terrorize others while showing me how a person can return from that place of darkness. His sharing of his story quite possibly cost him his life, and I feel it should be read. 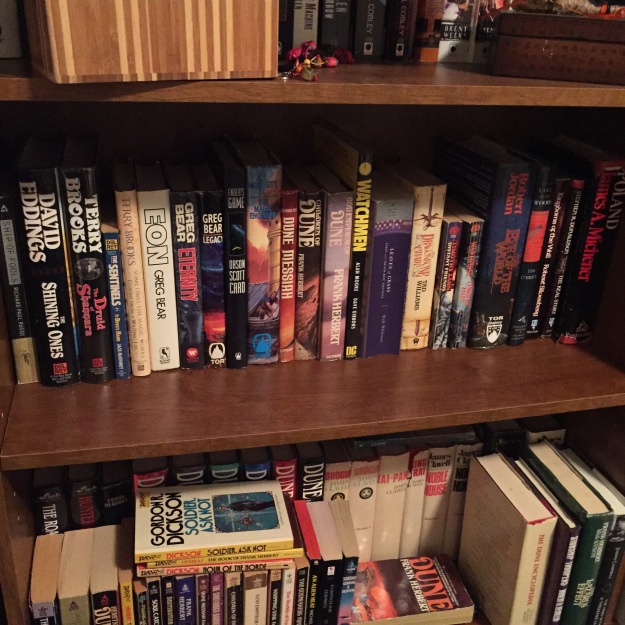 Ship Of Fools by Richard Paul Russo is a book that feels alive and both terrifies as it inspires. It captures the feeling of the original (and best) Aliens movie: Alien. The Shining Ones by David Eddings because the cover of this book inspired me to read Eddings and to start my own book collection. The Druid Of Shannara as it is the book that first introduced me to Terry Brooks and showed me the picture of a tormented soul that only wanted peace but sacrificed that for a cause far greater than personal peace. Robotech The Sentinels Vol 1 The Devil’s Hand by Jack McKinney because as a child the Robotech series was alive to me and I read it over and over again losing myself in the pages of the series. Sometimes The Magic Works by Terry Brooks not because it inspired me to write but because it inspires me on how to approach life. Eon, Eternity, and Legacy by Greg Bear because you won’t find better SciFi anywhere and within the pages of these three books you’ll be faced time and again with moral choices and deep questions on humanity. Ender’s Game by Orson Scott Card because in Ender Card has created the ultimate outsider from which to look upon humanity. The Magic Engineer by LE Modesitt Jr because no list would be complete without Modesitt and how he makes you confront balance, question yourself, and better yourself while telling an amazing story. The rest of Frank Herbert’s Dune saga because you can’t just stop with Dune! FH does a better job of exploring humanity than most humans ever will. Watchmen by Alan Moore & Dave Gibbons because truly who does watch the watchers? Leaves Of Grass by Walt Whitman because WW will inspire life within you with his words. Memory, Sorrow And Thorn by Tad Williams because I came across this series at a time when I needed an escape from every day life and this trilogy transported me into a magical realm. Distant Friends and Warhorse by Timothy Zahn because they showed me how excellent SciFi can be and challenged my ethics. The Eye Of The World by Robert Jordan because I found RJ’s work at a time when I was the same age as his three main characters and came of age with them. In The Lake Of The Woods by Tim O’Brien because O’Brien helps to open up the Vietnam War to those of us born to its veterans. Kingdoms Of The Wall by Robert Silverberg challenges your belief system. The Real Story by Stephen R Donaldson shows you how difficult a task it is to get to the truth when everyone has their own truth. Poland by James A Michener opened up a part of the world for me.
These books and many others influenced me in many ways. Exploring humanity and trying to understand our nature matters to me and these authors offered glimpses into that. I think the more we wrestle with our morals and ethics the more we discover who we are as a species and enables us to discover what makes us human.
Selecting five books from my bookshelves was a difficult task! So I enlisted my puppy dog’s help! She had final day and approved my selections. 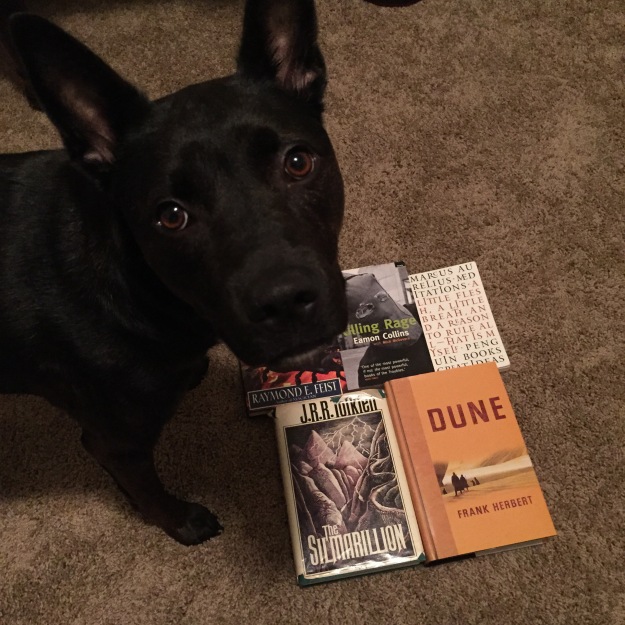 Which books would be your most influential books?

1 thought on “The Winners Of Most Influential Books Are”