In the last post I told you of the Second Runners Up to my Top Ten Comic Book Series: Cerebus, Watchmen, Revival, Locke & Key, Trees, and Sin City. All of which are excellent comic books, and I think highly of. Next up are the First Runners Up: 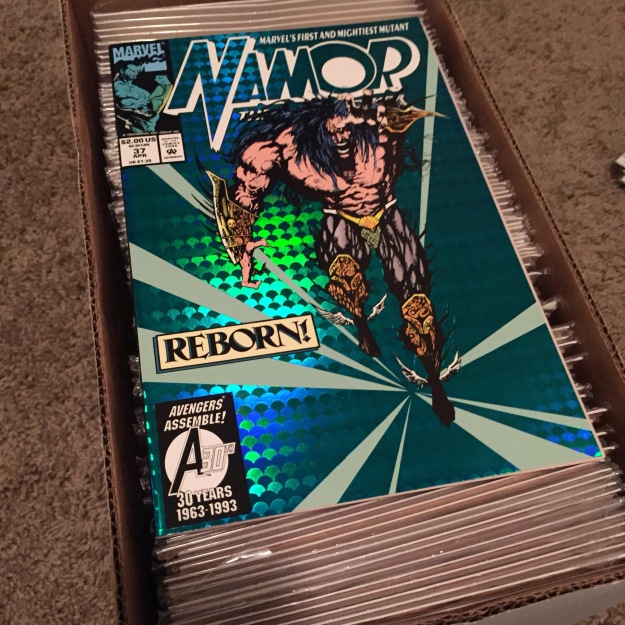 Namor! The John Byrne reboot followed closely the Jae Lee artwork on the story captured and held my attention back in the days when the world was primarily reading only the comic books that started with an X! Byrne is one of my favorite creators/writers/artists and I didn’t expect Jae Lee to surpass him but Jae’s art was perfect for the emotions of Namor.

Hellboy by Mike Mignola I still remember the first time I saw Mignola’s artwork. I didn’t appreciate it properly. I was young and thought all artists had to draw the same way. However Mignola taught me otherwise and opened my eyes to how art was integral to the story telling process of comic books. His work on Hellboy is work worthy to be read through the ages.

Aliens Versus Predator published by Dark Horse Comics combined the monsters of my childhood together into one long before the movies did. Dark Horse kept the stories tense with action and suspense, while also filling them with stimulating debates.

Hard Corps by Valiant Comics was incredible. In a world filled with superheroes Hard Corps took a team of normal people and equipped them with superpowers, but only one superpower at a time. The interactions and stress the team members experience make for excellent storylines. Oh and all the team members are technically dead. The organization they work for has resuscitated them and enabled them to have these powers and as a result they rule them with an iron fist… at first…. Great series.

The Red Star by Christian Gossett was one of the best SciFi comic books created. Set in an alternative dimension USSR at first the heroes think they are fighting an earthly war only to discover that they are truly fighting the very gods themselves.

This concludes the runners up! Next we will feature the top ten comic book series!